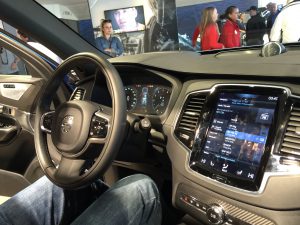 It is just a normal when purchasing 40K- 60K Euros or even dollars’ worth car, then another couple of thousand bucks for GPS navigation system would not make a big hole in your budget.

It is well known that Volvo is famous for its safety and reliability and many of us this is the main reason to make choice of this, not so cheap, a brand for the next car. It could be brand new Volvo car or in perfect condition used the car.

In my case, it is Volvo XC70 2009 model Summum level of equipment and it comes with RTI (road and traffic information) GPS for car with Pop-Up Dashboard Mounted Navigation Display Screen.

The car is equipped with extra safety systems like ACC (Adaptive Cruise Control), BLIS (Blind Spot Information System, Collision Warning with auto brake, distance warning and some other not on my previous cars in the best Swedish style.

My consideration is that the reliable, convenient in use and with the latest map updates car GPS navigation system also could be considered as a car safety feature.

Does Volvo RTI GPS navigation tick all the boxes for excellent sat nav tool? The short answer is, Not.

Definitely, it is my personal point of view, but it is based on some experience and common sense. The biggest drawback, in my opinion, is a rare map update possibility. I am not speaking about latest Volvo Sensus Navigation. I will take a short overview as it is interesting for me, but, there is so many RTI navigator equipped Volvo cars on roads all over the World and driving with two to three years outdated road maps. In reality, it is not safe. 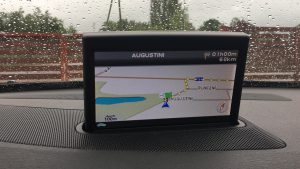 I know about it because at present myself am forced to come to terms with it. I always use GPS navigation in my car even on well-known roads and streets. For someone, it may seem strange, and maybe it is so, but it is my way to drive. It is funny, but sometimes I use WAZE or other iPhone 6S navigation apps when sitting on a commuter train.

Well, what about my Volvo XC70 GPS navigation system.

I purchased this all in all beautiful car just about a month ago. Made a pre-selling detailed inspection which resulted in minor car suspension deficiencies. The price was good and hope to drive that car for years to come.

Let’s suspension wait its turn to be mended, the first I was checked a GPS navigation. European navigation consists of four DVD but in my car was only one disk not for my area. No problems, I found many online offers but, unfortunately only 2013 edition. Rumors are that 2016-2017 edition is on their way, but not Today.

I know what I am speaking about. How?

Very simple, driving on familiar roads, I am directed to the utterly foolish tracks or streets and so on. Yes, it could take place even on my favorite TomTom GPS for car, but in fewer situations. It is because of lack of map updates. I understand that it is business and to make updates some amount of resources must be spent so for customers to pay for it is just standard.

To be honest, I do not understand why Volvo is not making updated DVDs at least yearly. I do not think that they do not have data for updates as new cars came with the fresh chart data. TomTom has quarterly updates and it is enough to my mind.

Someone could argue me why I do not use my so often mentioned TomTom sat nav? The answer is that my old durable, loaded with the newest updates, TomTom Go 720 is in the glove box on constant standby mode.

Until now I not yet set an unknown destination but once get stuck due to roadblock luckily online driven Waze has helped to get out of a trap.

Update shortage is the major con of Volvo RTI navigation for me.

In the other way very convenient for setting destinations and users friendly guidance. Even a lack of such an accustomed touchscreen is in proper manner replaced by remote control stick.

I do not wanna dive into details it is very straightforward explained in the manual and drivers has its habits for car GPS navigator usage.

It is inevitable that automakers are competing in their car sat nav indicators and built-in car Infotainment systems becoming better and more expensive, but there is one big but, money.

Let’s say that you are about to buy a new car for $ 12,000 but with a built-in navigation the same car comes for $ 13,500. One of the best TomTom Go 5100 portable GPS coast less than four hundred or very powerful Garmin NuviCam LMTHD for about three hundred fifty. What do you choose?

For everyday use, I prefer Volvo RTI navigation system car, but for longer and unknown roads and cities, I put my TomTom into the holder for backup and to be sure not to get lost and not consume an extra fuel.

Have a safe and pleasant road ahead!

I just wanna add some personal opinion after last weekend trip. It was partly abroad, and my iPhone mobile data roaming was off to avoid extra charge for data traffic. So none, except for Maps.me, smartphone navigation apps were unusable.

I am very disappointed about VOLVO RTI MMM2 navigation, at least here in the Baltic States. The main complaint is an absent of option which excludes gravel roads for route planning. Even free maps.me navigation app leads me to better road choice than VOLVO navigation. I hope that next updates be more usable for navigation.

At least now I am convinced once again that my choice for TomTom as backup navigation is the right decision.

What Is the Best GPS Snowmobile Trail Maps?