How NAVIONICS Navigation App Could Help for Safe Sailing.

Navionics is the best marine navigation App for smartphones or just one of many? Let’s take look!

All the time I have argued that a stand-alone marine GPS navigation system is must-have equipment on a yacht or any other ship and I still claim so.

Am I not in conflict with that what is being said? At first glance it might seem so, but, however, this time, I would like to disprove it. 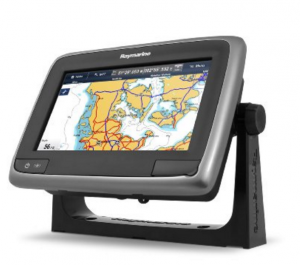 How I found Navionics iPhone app very helpful and enjoy it sitting in my home office far from real sailing and the onboard GPS navigation system.

In one of my previous posts, I have promised shortly write about my adventures and a bit risky sailing from Riga on Baltic sea to Lowestoft UK East coast. I would like to do it a way to somehow this story be helpful for fellow mariners showing chosen routes, available stopovers, fuel stations, marinas and more tips from real life experience.

This event took place in August 2010, and some details almost faded away, but a little strained still remember quite well.

First, I decided to do is to make the entire marine navigation route, I have sailed, on the nautical chart. I remember all details with stopovers and so on. But sitting in front of my MacBook Pro and old good Acer laptop from a right-hand side, I found, that have no tools in my Mac or PC to do it.

Another SeaMax marine software’s loaded laptop has been lost or just borrowed to fellow yachtsmen and at the moment, I found myself with no appropriate tool to execute navigation routing homework.

At First, I decided that the only way is purchase new marine navigation software with navigational charts. Sooner or later I will be forced to do it, but my potential charterer promised to sponsor me with € for such an expenses.

But I found a solution.

My iPhone still is uploaded with Navionics Baltic Sea app. I used it for ice fishing on Peipus Lake to find previous years good fishing spots. Even more, I Was forced to use it on my voyage mentioned above as an emergency GPS navigation tool as far as Raymarine chart plotter and Acer laptop as navigation device was dead.

Today I have Navionics Europe, which is more advanced software. We do not need to store all charts in phone memory just those required for expected route and download from Navionics database.

Very long introduction. What is cool in Navionics app and how to use it to make long range marine route preparation at home?

One more thing guys. I promise you that it is not copied from internet YouTube or other resources. It is my real experience and, therefore, could contain some errors and mistakes. Correct me if any.

The best way to me is to show a real route planning example.

Let’s make a safe marine route from Catania, which is in Sicily, Italy to Bari Italy mainland.

Before even commence to do it, I have to navigate to boat settings and change it regarding my boat real values. It is important as automatic route calculator choose safe path depending on under keel clearance, restricted sea areas, and other navigation aids restrictions. 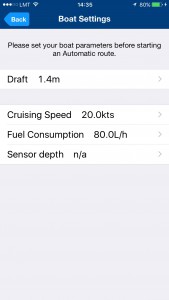 Then go to drop down menu and choose Automatic Route. You could choose Manual Route, but it takes much more time to make the passage. Manual route feature would be used to make some corrections in real sailing mode. For example, to make and additional waypoint for autopilot alarm and other.

Now you are ready to make the route. Go to map select Automatic Route and type the name of departure point in upper „from“ blank space in case if you are entirely clear about that place. 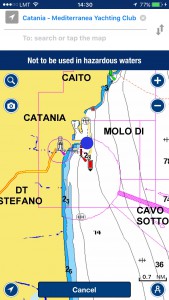 A better way is to go to expected marina, zoom in and tap to get a place. In our route, I tap on Marina sign on a map, and empty destination row is loaded by marinas name. In our example, it is Bari-Porto Vecchio Marina.

And voila, your homework is almost done. As you see in the screenshot there is total distance, expected sailing time and fuel consumption and by pushing ℹ️ next to these numbers, you can see other valuable information along your route. 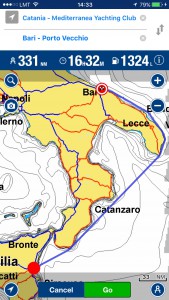 As I said before, that Navionics Europe app does not keep all nautical charts in iPhone memory, just those you are downloaded for your routing needs. You could see on Italy boot; the lighter colored area is automatically downloaded sea charts as far as I made my voyage plan.

As you can see total fuel consumption is about twice more than my boat fuel tanks capacity, so I need to find a refueling place. Just tap on blue route line and move to expected marina. Navioncis marine software will recalculate all route and updated data appears on the screen. 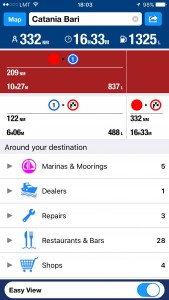 So far so good, but I would not like to keep my expensive iPhone on the open deck or even all the time in wheel house to gaze at the tiny screen.

It is a solution even in this case. Transfer your iPhone prepared route to WiFI enabled chart plotter.  Almost all recently produced marine navigation stand alone devices have such a feature.

Raymarine WiFi is the best choice, but you could choose other as well.

After you are ready to set sails for next beautiful sea passage, just enjoy sun, wind and waves. What could be better than it?!