By searching a way to update my car’s infotainment features, I found Rand McNally OverDryve 7 GPS and decided to take more detailed research of this device.

The first impression was great but it not for me, at least until I am not driving in the USA and Canada. But as far as I did some searches and to know what else the market offers in this area let’s take a look at Rand McNally.

It is known as more than Century old company that provides mapping and with Rand McNally driving direction tools and road atlas for the USA are familiar most people.

So, how close this device is to the CarPlay or Android Auto?

CarPlay is an Apple standard and Android Auto is a smartphone projection standard which allows operating smartphones through the car dashboard’s head units.

It is no secret that mobile phones are so smart and can be uploaded with the whole list of infotainment features as GPS turn by turn navigation, music, hands-free communications, Wi-Fi, Bluetooth, the internet and more.

Then why do we all need something else, if the iPhone or the Samsung Galaxy (and other smartphones) can carry out all the necessary for car infotainment functions?

Theoretically not necessary, practically CarPlay and Android Auto are very useful and a great invention.

Without diving into the details, I would like to highlight some. Maybe my list is not sorted in order of importance and not all the advantages offered by those systems are listed. It is just my opinion as a potential user.

Well, we can talk long about CarPlay or Android Auto but our topic is Rand McNally OverDryve 7 GPS. I just wanted to lead you to the idea how powerful is the smartphone to use it as a core of the car infotainment system.

Rand McNally OverDryve 7 inch tablet is new for me but essentially just another one from competing GPS manufacturers as Garmin, TomTom, Sony and more.

Overall it is a great idea to update GPS navigation system of your car, truck or camper. By the way, Rand McNally is specialized for trucks, buses and other oversized vehicles so navigation software can be adjusted to any size of the vehicle to calculate the best route.

This tablet has many great functions to assist drivers like engine monitoring, tire pressure control, front and rear dash cam, even FM radio transmitter and antenna built into the base. You can connect via Bluetooth your phone for calls, messages, and play music. OverDryve has microSD slot, MicroUSB charging port, headphone jack, and even a Micro HDMI port.

The large and solid mount services for additional charging port for phone and FM transmitter. 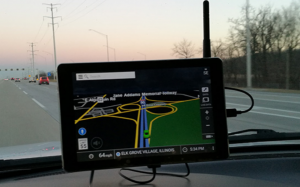 Maybe I forgot something important as well but now wanted to see whether there is everything that I would like to have for my car.

The main goal is GPS turn by turn navigation, and generally, it executes this task well especially for truck drivers.

When connected to cell phone use it as a hands-free tool to call and manage music playback.

Monitor your engine performance and pressure in car tires by adding optional hardware, and I think it is a very useful feature.

A significant drawback for all systems mentioned above is a lack of Waze integration. I found some ways how to run Waze in the background for CarPlay, not sure about Android Auto, but I would like the mirroring picture and voice directions from iPhone to the car infotainment system.

Why is Waze navigation application so important to me?

Waze information data mainly is based on crowdsourced data and usually, it is the fastest way to get dynamic real-time traffic information. In fact, do not always trust blindly to all information obtained from other Waze users but the latest news from developers gives hope for a better credibility as collecting traffic and other info not solely from online users but also from local governments.

I am using Waze on iPhone 6S Plus on a daily basis instead of factory installed GPS navigation system, TomTom Go and Garmin Nuvi which are in standby mode in the glove box. Waze app is great to know the dynamic situation on my expected route like traffic jams, road alerts, police information, speed cameras and other.

I recently discover that Waze can be used in offline mode by highlighting expected route area when you are connected to the internet. Last week I used this feature in Sweden to see speed cameras on the highway.

One real drawback of Waze I found is a lack of lane assistant so better use another navigation device in unfamiliar busy city jungles, remaining Waze run on background. I drove on the wrong lanes in Stockholm, and I lost not only the time but also some six dollars additional Congestion tax fees.

…keep Google Maps and Waze separate for the most part?

Just to finish this review about Waze integration into the car navigation system or to reproduce smartphone features to infotainment devices of the car, I wondering why Google as the new owner of Waze app since 2013 keep Google Maps and Waze separate for the most part?

Back again to the Rand McNally OverDryve GPS navigation tablet.

Below are words from myOverdyve homepage.

Make any car a connected car ™

It cannot be counted as fully loaded car infotainment system, but Android tablet created to use as car navigator with many valuable features.

In conclusion, the short list of features and some cons as about pros see above;

-Flaws of dash-cam and voice assistant;

-Numbers of complaints from Amazon users that this tablet freezes up when using the GPS;

-Navigation only for the US, Canada as no maps for the rest of the globe;

For less than $300 bucks I would buy Rand Mcnally Overdryve 7″ GPS tablet despite these shortcomings. Only a lack of maps of Europe is the reason I would not.

Which is the Best GPS for Truck Drivers