I would like to make a short insight of B&G Broadband 4G Radar as one of the main navigation tools on board of every Volvo Ocean 65 racing boat. 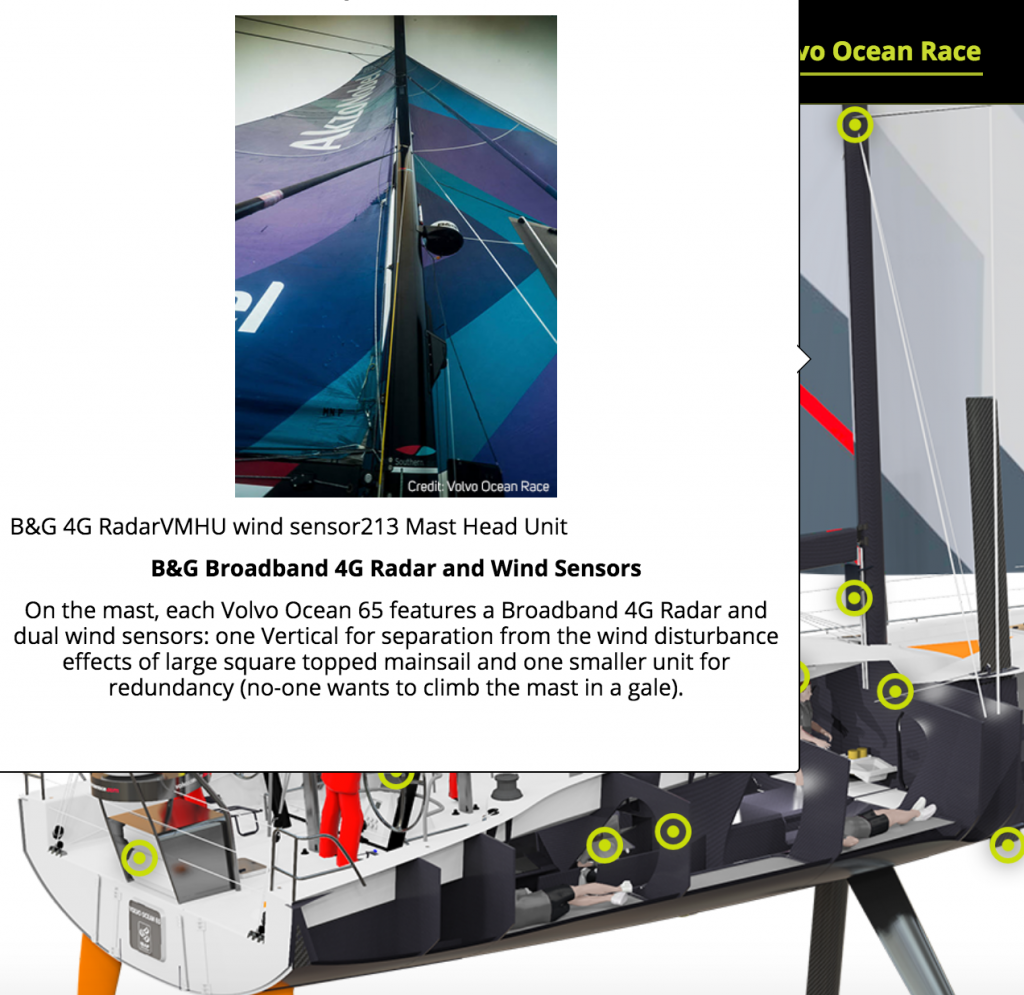 Why exactly do I want to look at the radar?

Radar on the vessel is the main electronic tool for navigation safety. Not the AIS (Automatic Identification System). It has almost nothing common with safe navigation. It is just information about ships around and target data can unexpectedly disappear for a variety of reasons. Unfortunately, many on board the ships (sailboats included) rely almost solely on AIS data and forget about traditional navigation experience.

Radar and visual watch still is the main grant for safe navigation at seas.

Those who follow the Volvo Ocean Race 2017/2018 edition know that ships collision took place at the very last miles of Leg 4 from Melbourne to Hong Kong at 20th of January 2018. It was the collision between Vestas 11th Hour Racing team boat and Chinese fishing vessel. Unfortunately, one of the 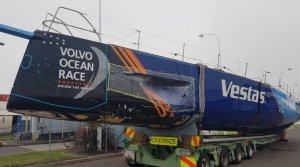 fishing boat crew members died in the hospital after having been rescued by the damaged Vestas 11th Hour Racing team boat.

Unfortunately, collisions happen despite cutting-edge electronics and strict shipping and racing rules. Like cars on the streets also the quantity of ships increases dramatically. Whether we want or not, however, a human is the main object both at the wheel of the car and on the bridge of the ship.

On this particular event, I am highly disappointed with lack of information which causes numerous rumors around the given accident and to the Volvo Ocean Race safety measures at all.

Even today (14, March 2018) it is so little information although the investigation by the Hong Kong and mainland China authorities is closed with no further action to be taken.

Until now I can’t get rid of the feeling that something is hidden from the public. Even more, what means words said by an Independent Report Team (IRT), chaired by Rear Admiral Chris Oxenbould AO RAN (Rtd), former deputy chief of the Australian Navy and an experienced ocean racing yachtsman.

„Any findings from the report that could benefit the wider sailing community will be released. It is intended that the report will be made available to Volvo Ocean Race by June 2018.“

As I said above, it is the human mistake, and no one can claim that nothing similar will happen to him.

I have been involved in two real commercial ships collisions some years before when serving as the navigation officer, luckily no fatal outcomes. In both accidents, ships were seriously damaged but none sank and in different ways were reached shipyards for repair.

In one case the investigation lasted for two years. Ship’s captain was replaced after the repair was completed. I can safely say that, regardless of the results of the investigation, it was based on a human error.

Now I have come close to the topic of the post, navigation tools of Volvo Ocean 65 boats and the radar as one of the most important ones.

Skipper says, „We were about 30 nautical miles from the finish, and I was at the navigation station monitoring the radar and AIS (Automatic Identification System), and communicating with the crew on-deck through the intercom.“ 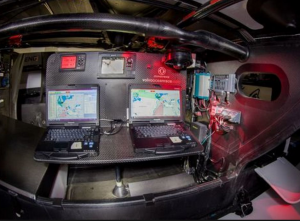 So, I have no right to doubt that the radar was turned on and the proper watch was in progress.

If so, why the fishing boat was not spotted on the screen? I assume that the crew are properly trained and has the experience to work with radar.

COLREG (Convention on the International Regulations for Preventing Collisions at Sea)

(a) Every vessel shall use all available means appropriate to the prevailing circumstances and conditions to determine if risk of collision exists. If there is any doubt such risk shall be deemed to exist.

(b) Proper use shall be made of radar equipment if fitted and operational, including long-range scanning to obtain early warning of risk of collision and radar plotting or equivalent systematic observations of detected objects.

(c) Assumptions shall not be made on the basis of scanty information, especially scanty radar information.

(d) In determining if risk of collision exists the following considerations shall be among those taken into account:

(i) such risk shall be deemed to exist it the compass bearing of an approaching vessel does not appreciably change;

Everyone can find online that all Volvo Ocean 65 2017/2018 edition boats are equipped with B&G Broadband 4G™ Radar.

I am not familiar with this equipment, but it is no doubt that this was chosen as the best option for Volvo Ocean Race.

„Our revolutionary Broadband 4G™ Radar gives all the benefits of the Broadband 3G™ Radar, consisting of a true 2 hundred’ operating variety, plus a few astounding greater features. The Broadband 4G has an outstanding 50% improvement in variety and target detection capability with a new 36 nautical mile variety and 18 variety scales to deal with the multiplied overall performance. Broadband 4G is the first dome antenna to appoint beam sharpening. This era permits a new feature known as target Separation manipulate, which improves the azimuth decision – or effective antenna horizontal beamwidth – up to the 2X decision of any 18″ dome. that is equal of a 3-half of foot open array radar!“

Well, this is said by manufacturers, and they never say bad about their product. But, what about gulls and guys on board? For most of them, it is already the second edition of VOR, and they are familiar with electronics and have to know all pros and cons if any.

I am familiar with the practical use of the marine radars, and it is not yet invented better tool when it comes to sailing in the dark and restricted visibility. Definitely, every one of them has some restriction but knowing and experience how the human can reduce deficiencies to the minimum.

Besides of the big ships I have some experience on ocean-going sailboats and even with the practical use of radars on them. Honestly, we have rarely used radar on the races mainly because of technical restrictions and lack of experience. Many boats even have removed antennas at all under the pretext that radar antenna is covering the sails blah, blah. For recreational boating, the situation is much better, and owners are smart enough to spend some extra for good radar sets to enhance safety.

Once I have the powerboat trip from Latvia to the UK, and all my GPS systems were dead then Raymarine Radar was engaged which I never used before. It was daytime, good visibility, and radar give me the feeling of some safety until I reached reach iPhone Navionics map coverage area. It was the good real-life experience on high speeds, radar antenna height about three meters. The weather was almost calm, and even small targets like other yachts and small fishing boats were spotted on the three-mile scale. Although I saw them visually as well and it eases an identification by the radar.

Again and again, I try to put myself on the boat and cannot find the answer to the question, why the fishing boat’s target was not detected on the radar screen?

Until we do not know the truth, even the most unpleasant one, we can only rely on common sense.

My conclusion is that the target was not spotted. There could have been many reasons, and I hope that the investigation found the truth.

So, as the topic is about Broadband 4G Radar here is some clear explanation from CruisingWorld.com

„As with some other radar systems, broadband 4G uses beam-sharpening technology that helps shorter antennas realize better performance and target separation. Target separation is an important feature because it lets you discern, say, a tug towing a barge, or two small vessels that might have appeared as a single target on an older radar.

Broadband 4G also features B&G’s proprietary Directional Sensitivity Time Control, which allows the radar to automatically adjust its gain. Harnett says Directional STC uses an algorithm to increase sensitivity when sailing downwind — when there’s generally less sea clutter — and to reduce sensitivity when sailing uphill; it continually measures the amount of clutter and adjusts its gain on a directional basis. In practical terms, this means you’ll get the clearest target definition that the sea state allows.“

I wish to all Volvo Ocean Race skippers, navigators, watch captains and crew the safe navigation and meet them all safe and in a good mood in Hague at the end of January 2018.

As an Amazon Associate I earn from qualifying purchases.
Tagged as Volvo Ocean 65
related posts