The First Successes and Mistakes of my Boat Trip.

To get satisfied of boat trip the proper safety procedures have to be made.

Power boats are feeling great on the rough sea if you are skilled enough to handle properly it. The most important are to be familiar with powerful engines. When you know how to operate properly, you can sail safely. All the time you have to keep in mind how much fuel is left to reach a shelter in case of sudden weather changes. Never touch to the spare fuel cans, except emergency. 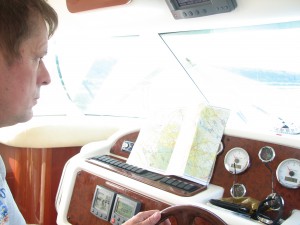 Keeping this in mind, I started my sea voyage from Riga on Baltic to Lowestoft in Great Britain most easterly port as a skipper on the board of Jeanneau Prestige 36 power boat.

It was middle of July 2009. Starting point on Lake Kisezers and heading to first refueling point in Bolderaja on left bank of river Daugava to fill up about 700 liters of diesel oil.

What the coincidence, luck or failure but after first ten minutes the temperature of one engine was critically rising and I had been forced to stop one engine and return to the home pier to check out the failure. I think that it was a very good lesson learned and, at least, I became a bit familiar with the engine room. The failure was a wear of Water Pump Impeller.

It was Saturday morning about 9 o’clock, but I found a local Volvo marine engine dealer and after a speedy car ride to the opposite side of town, in a couple of hours, spending the first €150, two new water pump impellers were on board. It took another hour, and we were ready to sail. 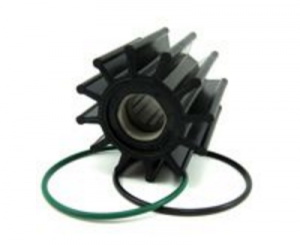 Slightly hurrying forward, I have to say that later I found this impeller in spare parts box on the boat which had already been purchased in the past. It’s all because I did not have enough time to explore everything. Luckily, I did not to spend my money.

We filled up our Jeanneau Prestige 36 fuel tanks to the top and passing Riga Freeport breakwaters, the marine adventure has begun. 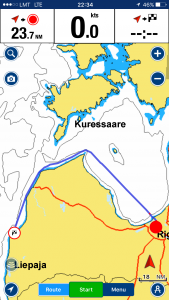 I made my sea voyage legs calculations based on average 18 kn speed and maximum distance between refueling stops 180 n.m. , assuming that it is safe marine calculation.

Running high speeds, we reached the first waypoint (WP) next to Kolka Lighthouse about in 3 hours covering distance for about 65 nautical miles. I enjoyed this marine flying mode. Everything works, and the weather was great.

As an experienced mariner, I was ready for sudden weather changes, even though the weather forecast was regularly updated. It happened, as soon as we entered in the Irbe Strait. The dense fog has reduced the visibility to maximum half a cable (about 90 m). No more high speeds, radar on and keep the sharp look out. It was not new for me as I used to sail such a visibility many times.

So I forgot to mention radar in my first boat overview. Raymarine boat radar, I do not remember a model. I had an experience with boat radars and knew that of them have little benefit for shipping. Only when a ship is at anchor. Anyway, big targets as merchant ships or big fishing boats could be spotted on screen.

And then I realized a real lack of AIS (Automatic Identification System) transponder. Today almost all boat owners have fitted his pricey boats with AIS, which are widely available even in Amazon.

Today almost all coastline is covered with volunteer private Marine Traffic AIS. So, as far as you have smartphone internet connection an AIS equipped ships are visible on the phone screen. But it was about six years ago, and AIS has just SOLAS ships and even fishing boats has no such a great safety tool.

Nowadays a situation is much better. EU regulations have forced owners of the commercial fishery boats, to equip their vessels with an appropriate AIS equipment. Mainly because for checking fishing restrictions and violations. It helps to increase the safety of navigation as fishermen’s frolicking sailing habits are well known.

Now let’s resume our sailing to Pavilosta. I kept clear of shipping lanes and navigate with safe speed about 6 to 8 knots. Luckily fog was disappeared in an hour, and we still had a chance to reach our destination until 11 PM after Gas Station is closed.

Pāvilosta district is like unpolished amber, lying on the west coast of the Baltic Sea. The salinity of the sea, the brilliance of the sun, and the rustle of the wind glistens in its shade.
Take it in your hand, and you will feel its tranquillity and calmness. How very light, unconstrained and relaxing it all is!
Have a look at it, and you will see the white sandy beaches, stately pine forests, and the old fishermen’s houses, which are still surrounded by the smel of the smoked fish.
Listen and hear the winds play with the waves throwing them against the seashore, and the gray stony jetties that stand there to protect the mouth of the River Saka.
Get to know it, and it will reveal the ancient fishermen’s traditions, the nature of tenacious seamen, pride and grandeur of peasants, skills of craftsmen and hositality of tourism entrepreneurs.
Each edge of this amber reveals something new, interesting and exciting. Draw its strength, energy and healing power.
Put it in your pocket, and take it along! (www.pavilosta.lv/en)

We entered Pavilosta harbor in time and immediately started refueling. In an hour tanks were full again, and we were ready to go. Previously, we thought that not sailing in a dark time, but, taking into consideration the relatively good weather and lost time for repair, I decided that we can go in the night I had already trained guys with autopilot operation and had hoped that I will be able to sleep a little.

The next stop Leba, Poland. Distance about 180 n.m. and the longest leg and most offshore one. Luckily wind direction was favorable E-NE and keeping speed about 15 knots I hoped to reach Poland before midday. 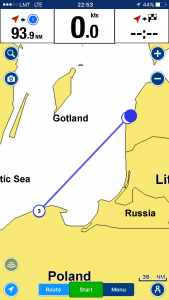 The only I worry a bit was fishing boats and nets. Although such a high seas fishing nets are usually not spotted and, as I checked before, our route i 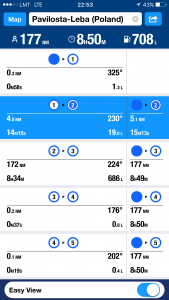 Everything was as we thought and I had an opportunity to sleep for about six hours.

We crossed Leba marina breakwaters about at 10 a.m. but suddenly was stopped by the Polish Border Guards. They ordered us  to moor at  Check Point pier.

„The Baltic Sea town of Leba is located in Middle Pomerania, 110 km from Gdansk, on the right bank of the river from which it takes its name. To the east lies Lake Sarbsko, while to the west is Lake Lebsko. The town is surrounded by beautiful pine woods and has a population of 4,000.
Leba is a health resort with a mild sea climate, with iodine and salt in the air, a high sunshine record, strong winds from the sea as well rapid changes of atmospheric conditions.“

I remember it was rather a funny situation. The Guards asked us to show our passports. As soon as they look at them a strange question was asked : „Why Latvian Citizens are sailing under the Germany flagged boat?“

I even did not know what to say, just answered that the boat is registered in Germany, and we have all ownership papers, power boat insurance and other required documents for the boat. Nothing new as it is common practice in maritime business and so on. I was not sure that they understood me clear. None of us speaks Polish, but Polish guys just his tongue. Then they simply gave us back our passports, said nothing and we resume to cover remaining ten minutes trip to Marina fuel pump.

We poured in about 700 liters of fuel and were forced to buy new mooring lines, because my super sailors. They had left them in previous port.

The weather was good, and we were ready to next, very tricky inshore 165 nautical miles’ boat trip stage to Stralsund, Germany.

The Backup Option for Boat GPS Equipment is Essential.