Kiel Canal Transit and Lessons Learned on the Way to Den Helder Holland.

I decided to resume Kiel Canal transit very early in the morning but had to cancel departure from friendly marina’s company. 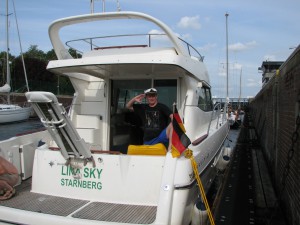 Had breakfast, rechecked fuel calculations and assume that not needed to refueling here, smarter will take fuel in Cuxhaven. My navigation software  and GPS for boat shows many yacht harbors and marinas in this well-known mariner’s city. According to calculations about 220 nautical miles to reach Den Helder Holland, but this exceeds the norm so Cuxhaven would be the best choice for refueling.

Fog has disappeared as fast as started and we were ready to set sails. Said bye to the French neighbor yacht and we were enjoying smooth sailing again. It took another four hours and with no problems passed Brunsbuttel Kiel Canal locks we entered very busy ships traffic Elbe river.

From the beginning, I wanted to check marina’s Alter Hafen fueling option that was just around the corner, but as it was low tide, the port entrance channel was not navigable. So I have to continue to proceed to Cuxhaven, which is about 15 miles away.

I used to navigate to Hamburg at least 20 times, in my job career and is familiar what mood are on ship’s navigation bridge or even predict passing ships action. Almost every inbound and the outbound vessel have compulsory pilotage and VTS (vessel traffic service) operators continuously are controlling ships traffic.

So even pleasure crafts must strictly follow COLREG and local navigation rules not to get penalized. One of main good seamanship rule is, never interfere navigation for ships which can safely navigate only in the marked channel because of the vessel restricted in her ability to maneuver or constrained by her draft (Rule 28).

Imagine, pour 800 liters of diesel into powerboat fuel tanks by the help of 20-liter cans…?

Perhaps today the situation has changed, but in 2009, I was very disappointed as no any refueling for pleasure crafts in Cuxhaven were found. Someone have offered me go to the gas station with cans. Imagine, pour 800 liters of diesel into powerboat fuel tanks by the help of 20-liter cans? Sad.

I have visited three places. Finally, a skipper of vintage sailing yacht  advised me to sail to Helgoland either back to Kiel Canal for refuel my boat.

The only worries were fuel.

I refuse to return into the canal as almost every seaman is a bit superstitious and this was the case. A friendly islander showed me a fuel station on the nautical chart and just warn that working hours is until 6 pm. Knowing Germans punctuality and deciding this as the only solution I hope to cover 36 n.m. in maximum two hours. Luckily the weather was just ideal; light SE breezes no waves at all. The only worries were fuel. Not because of lack of it as I have 100 liters in spare cans. I had to run in almost maximum speed to reach Helgoland Islands in time and consumption will be significantly more as in sea speed sailing.

The German guy made a phone call to unknown for me a phone number and the bascule bridge opened. Honestly, I even did not mention it when entering this Marina and without the help of this fellow, I would not have been any hope to reach my destination timely.

It was 3 pm and after passing harbor limits, I speed up to 28-30 knots. It was the glorious ride. The Jeanneau Prestige 36 power boat just flying over Elbe river estuary and my real speed was around 32 knots because of the ebb.

Everything was great only one thing. I realized that boat has a trim to the forward, but fuel pickup is at the aft position of a tank.  How to change the boat’s trim I realized just later. 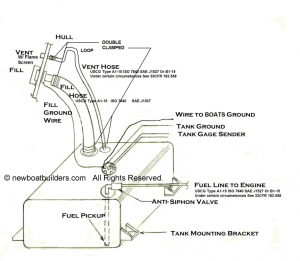 I had forced to stop my flying mode to fill remaining spare fuel and avoiding stopping engines after entering into yacht harbor. To clarify, when a ship is heading high speeds then generally hydrodynamic law forced to tilt (trim) a boat to the aft.

It was about five miles to my destination and stopped the boat. Poured a fuel, with the great caution not to spill any drop of diesel oil into the water, repeated air bleeding procedure from fuel lines and resume my trip to Helgoland refuel place.

And what you think?

Not the correct place. Either the German skipper or I had made a mistake. The gas station was in another place, but the engines were silent again.

Even more, it was the private yacht harbor and from the pier, someone calls me to running away. I replied that emergency situation, out of fuel and luckily he allowed me to berth at the empty position.

Time was about half past five so half an hour to fuel station closing. Seeing our despair, the local ice cream kiosk boy gave us a stroller, and we put in an empty fuel can hurry to the specified location.

It takes ten minutes, and we arrived at the gas station, filled all five cans. After, I said the fuel station employee that I need to fill up another 800 liters in my boat which is fifteen minutes sailing distance away.

…a good Russian vodka as a present

As I suspected, he refused. I started to explain the situation, but he argued that is very busy. I wondered, with what busy? There are dozens of homes on the Island and one pub? Then I said that maybe he wants a good Russian vodka as a present, it worked instantly. The boy told me to move the boat here after one hour.

We were back and made fast to fuel station pontoons in about half an hour. My sailors run for a couple of beers, but I was waiting for pump man. The Refueling man arrived after five minutes. I guess he wanted a free Russian Vodka very much.

I filled to top all available fuel tanks and cans as diesel oil price in Helgoland was much cheaper than on mainland, tax-free zone.

And again, I broke my set rules, not to sail in the dark. 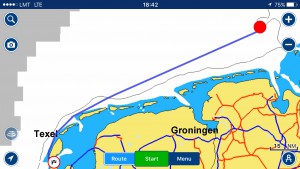 ts SE and sea state 1 meter. Only fishing boats could cause minor headaches. So we enjoyed another spectacular North Sea sunset and the first time I spent a couple of hours on the fly bridge which is equipped with identically as on the main bridge.

In such wonderful moments, you really understand that The Life is so Beautiful!

The mood was excellent, and we were on the way to Den Helder Holland, our next stop and another boat engines feeding tubes.

Garmin Marine GPS System is Just as Popular as the Garmin GPS for Cars?